“We are what we repeatedly do. Excellence, then, is not an act, but a habit.” – Aristotle

I believe that we have much more control over our character than we realize. We see our lives, by default, from our own perspectives. This leads us to think that much of our behavior is natural, where in fact it has been shaped over our individual history. To become the sculptors of our own persona, we need to adopt a “third-party perspective”: looking at ourselves critically as if we were a distant observer.

A great proponent of human virtuosity is the late Benjamin Franklin, one of the “Founding Fathers” of the US. He proposed a simple, yet powerful exercise, to become a more virtuous person. This exercises was one of many used in his pursuit of “moral perfection”. Franklin believed, and so do I, that the best way to serve humanity is by being good to others.

Step 1 of the exercise is to set a “gold standard” for behavior. Franklin suggested to do this by establishing a list of the virtues you hold in high regard. For each virtue, write down a short sentence for clarification. Additionally, I have added a list of vices that I wish to keep away from. This provides us with a framework upon which to evaluate ourselves critically.

Step 2 is evaluation. In a notebook, create a table with seven columns for the days of the week, and rows for each of the virtues you aspire to. Each morning, read through your list of virtues. Each evening, with your notebook in front of you, assess which virtues you were able to show and which you failed to comply with. I keep an additional page of notes to explain in more detail how I could have behaved more virtuous. 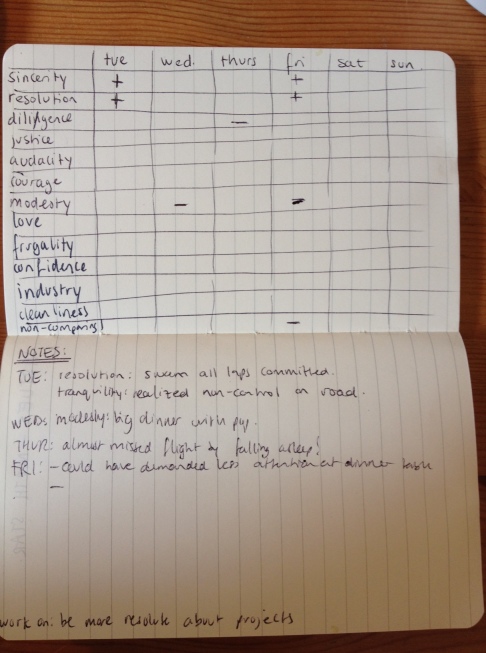 Over the past few days, this exercise has helped me significantly. First, studying a list of virtues each morning creates a positive mindset to start the day – it sketches the potential of how good you can be. Second, I have experienced more moments in which I looked at myself from a third-person perspective, because I recognized a situation in which I could behave more virtuous. Third, reflecting at the end of the day helps you evaluate your behavior.

The goal of this exercise is not to be totally virtuous, but to be mindful of yourself, particularly when you are about to make “a mistake”.

This exercise is in its essence very similar to one proposed by Warren Buffet, which I have covered in an older post. The gold standard of virtues in that exercise is established by looking at your classmates, which is an interesting way of deriving virtue from practical behavior. Franklin’s exercise is worth a new post however, as the table-form evaluation is very helpful and practical.

4 thoughts on “On virtues”