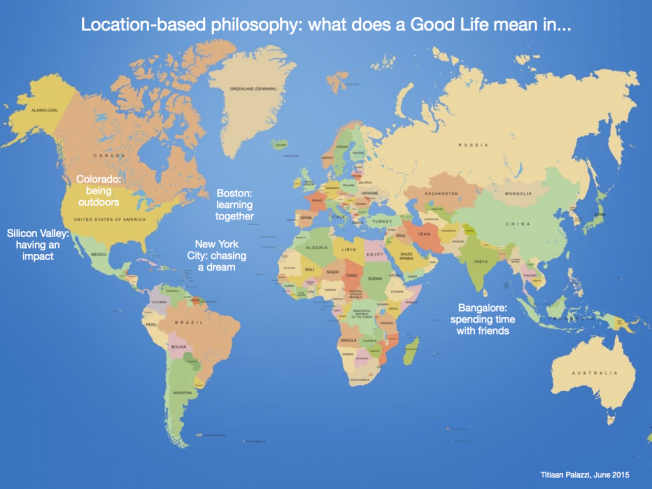 Since moving to Colorado, I spend more time outdoors than before. On the flipside, I spend less time meeting new people, and less time making ideas happen. Why? Because living in the mountains influences what you think of and what you’re invited to.

Where you live defines how you live. This realization made me think back of the places I’ve previously lived. I realize that the definition of a good life varies for each location.

So what does it mean to live a Good Life?

Aspen, Colorado: a good life is … being outdoors

A perfect week for a Coloradan includes a climbing-adventure, rafting down a river, and backpacking—ideally all together with friends. Most men in Colorado grow beards, so I stand out perfectly as a beardless European. Work, for many, is second in priority for most to the life outdoors.

New York City: a good life is … chasing a dream

When you stand still on a NYC-street, observing the crowd passing by, everyone is going somewhere in a hurry. Each New Yorker seems to follow the Hero’s Journey: hearing a call to adventure, then following Joseph Campbell’s cycle to make it real. New York is the ultimate anti-Buddhist city, because attachment to goals reigns supreme.

Silicon Valley: a good life is … having an impact

When you meet someone at Stanford or at a Bay area meetup, the first question is often aimed at finding out whether you run a company. If not, the asker quickly loses interest, unless you can convince them that you are impressive otherwise. People (including me) are attracted to Silicon Valley because it’s a place where people discuss big ideas, and want to have an impact in the world—creating “a dent in the universe.”

Cambridge, Massachusetts: a good life is … learning together

In Cambridge, people seem to care less about what you do, and more about what you think. People—many of whom are graduate students at some of the world’s best higher education institutes—are curious to learn, and to explore topics together. I’ve learned about the way hummingbirds flap wings and how religions grow, all in a single conversation.

Amsterdam: a good life is … <many definitions possible>

Bangalore, India: a good life is … spending time with friends

In India, more than in the United States or Europe, spending time with friends is important. When you walk the streets of Bangalore or Chennai, you see people everywhere chatting: at the chai-stand, while buying vegetables on the market, or simply standing outside. I think this culture will disappear as the country becomes more Western—Bangalore is already more “rushed” than a smaller city like Jaipur.

Have you experienced the places above differently? Which other places have distinct philosophies? Where do you live now, and does the local philosophy fit yours?

Of course, the local philosophies above are generalizations. In each city, you can find many different groups of people (i.e., tribes), each with their own philosophies. I still believe the location is important, though. In Aspen, the surrounding mountains call you to a life outdoors; in New York City, the never-ending bustle makes it natural to spend time with other people.